BACK TO THE BULLETIN BOARD
Bill Halford Passes Away at 58 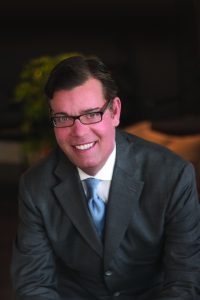 Newport Beach –  William R. “Bill” Halford, CEO of Bixby Land Company and a leader in the Southern California commercial real estate community, has died. He was 58. Halford, a fourth-generation Bixby and great-grandson of George Bixby, started at Bixby Land Company as a board director in 1994. He was named Bixby Land Company’s eighth president and CEO in 2006, and immediately began reshaping the then 110-year-old privately-held legacy land company into a contemporary real estate investor, developer and operator. He installed Bixby’s current executive team early on and was instrumental in changing the company culture and strategic direction for the firm. The company’s real estate portfolio was repositioned through the disposition of non-strategic assets to create a homogenous investment portfolio of institutional quality office and industrial properties. “Bill’s vision and ability to motivate people to perform at a level higher than they may have thought possible was instrumental in establishing the investment performance and integrated services platform that today defines Bixby Land Company,” said Aaron Hill, president of Bixby. “His leadership has made an immense impact on the company and has left it positioned for future success.” He also set in motion a value add investment strategy focused on the redesign and development of creative office projects. As an early adopter in the creative office movement, Bixby created stylish outdoor amenities areas and energized work environments. Bixby has since completed over 30 creative office buildings throughout California and in the Pacific Northwest. The firm also recently partnered with AXA Investment Managers – Real Assets, a leading property portfolio and asset manager in Europe, to acquire $400 million in industrial properties in the Western U.S. “We have lost an inspiring leader, mentor and friend, and will continue to honor him by carrying his legacy of achievement throughout the organization as we move forward,” added Hill. “Bill was an extraordinary person who brought his creativity, passion and energy to the company, and it will be forever better for his contributions.” Halford was an active leader in the Southern California real estate industry. He served as a catalyst for and chairman of the Real Estate Advisory Board and the Dean’s Advisory Board for the Center for Real Estate at the Paul Merage School of Business at University of California, Irvine. Halford was a member of the Advisory Board for the Fisher Center for Real Estate and Urban Economics at University of California, Berkeley. He was the recipient of the Good Scout Award by the Orange County Council of the Boy Scouts of America and received a Lifetime Achievement Award from the Center for Real Estate at the Paul Merage School of Business at University of California, Irvine. Halford was a graduate of the University of California, Santa Barbara, and completed advanced studies in real estate at Harvard and MIT. He is survived by his wife Cindy , daughter Ali , son Bixby, mother Suzy and sister Heidi. The family requests that Bill's memory be honored through donations to the Core Kidney Program at UCLA via the following link: https://giving.ucla.edu/Standard/NetDonate.aspx?SiteNum=624
4 years ago
Share this: